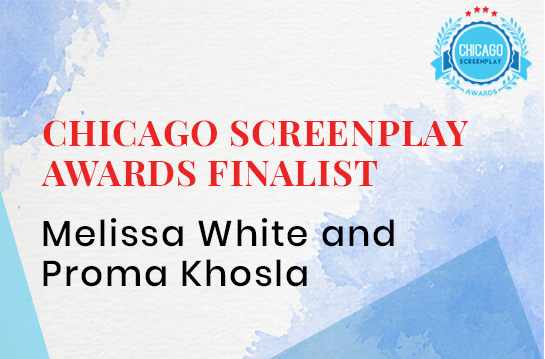 I’m Proma Khosla, an Boston-born Indian-American Michigan transplant to New York City — so I feel like I’m from a few places. I have been writing and dancing for about as long as I could do either. I’ve been writing, directing, and producing online videos since 2015 as half of the comedic duo PromRad and a founding member of Lion Party Films.

I came up with the idea during my sophomore year of college, probably within the same week that I joined a dance team. The culture was already around me, but now that I was entering that world myself I knew the story possibilities were endless — and that they demanded to be put on screen.

I am terrible at outlining but adore writing out scenes. Filmi has been through roughly 92349873 iterations of basic outline and scene arrangement, but some of the moments and lines I love best in it have stuck around for years. I love creating dialogue that sounds real and authentic, so I often start writing scenes before I even know where they’re going or where I’ll put them.

I’m also someone who struggles to get in the zone to write (though if what I hear from other writers is any indication, this is all of us). Whenever I have a story breakthrough or urge to write, I lean into it and ride that wave for as long as I can — because who knows when the next one will happen.

One of my editors at the college newspaper told me “Journalism is dead. You should write for TV.” I may have disagreed with the first part (especially given my subsequent

career as an entertainment journalist), but I had to agree with the second. “I should write for TV,” I thought. It was his idea but it felt as right as if I had always known, and I never looked back.

I worship at the altar of funny women. In my formative years it was Tina Fey and Mindy Kaling, now extended to the likes of Issa Rae and Phoebe Waller-Bridge.

I’ll also add that the movie Scott Pilgrim vs. the World was nothing short of love at first sight for me. After taking film classes that walked us through decades of history and rules, it was brilliant to see a filmmaker break all that down in service of greater entertainment. I see its influence throughout my own work as I experiment with tone and format, or when I choose to trust my own instincts and taste over the more conventional alternatives.

SO MANY. Too many? No such thing. Two big influences for my pilot are Dear White People, and Friday Night Lights, which do an amazing job of welcoming viewers into their characters’ distinct worlds. I have never stopped loving Boy Meets World or Avatar the Last Airbender, which is one of the best shows in human history and should be treated as such. I think Fleabag’s final run is a perfect season of television, and I have been known to rewatch a lot of Lovesick after late nights of drinking.

I could honestly answer this question for hours. I should move on.

This is an impossible question but the first thing that comes to mind and indeed a top contender for this is a scene from one of my favorite Bollywood movies, Kuch Kuch Hota Hai. The two leads take cover in a gazebo during a rainstorm and end up dancing a romantic duet together. In the script, it’s less than half a page of the sparest description I’ve ever seen; on-screen, it is an achievement of direction, choreography, chemistry, and everything else at play.

Another insanely tough question! One that stands out in recent memory is Erik Killmonger from Black Panther, played by Michael B. Jordan. It’s easy for superheroes and their villains to be two-dimensional, but Jordan and writer/director Ryan Coogler never let this happen. They create a character whose trauma and anger linger long after the credits roll, whose pain at once connects him to the film’s hero T’Challa but

also divides them immeasurably. Jordan and Coogler both happen to be among the top talent of their filmmaking generation, a collaboration that has lasted for years and shown us the power of storytelling.

This is probably not the desired answer for this type of question, but it’s the same person who told me to pursue screenwriting, a college friend who passed away in 2016. He and I became fast friends in those early months, and he was the first person I ever told about Filmi, when it was nothing more than an idea.

We used to talk nonstop about TV and movies and made each other laugh constantly. I’d like to do that again.

I am a screenwriter, novelist and short story writer from a small town in Texas, called Friendswood. I now live in Los Angeles.

I started working on My Georgia O’Keefe screenplay in 1994 when I was very young, doing intensive research and gathering notes. I finished it in 1995 and put aside for 25 years. In May of 2020, I pulled it out, polished it, and now it is placing in contests.

I find a story I am passionate about telling and then the words/writing just flows.

I start with Character Bios, Character development, Then a Plot outline, then a rough draft, then many, many polish/revised drafts

I have always loved to tell stories, since a very young age. I love to watch movies. It was inevitable.

No. I’m not obsessive.

I love so many films from many different eras. My favorite types of films are epic love stories, like Dr. Zhivago, Legends of the Fall, The English Patient. I love all types of love stories. I do not have a favorite moment.

I would love to speak with Francis Coppola and pick his brain about writing. He is such a phenomenal writer. I would love to ask him how he picks his projects, and where he gets his inspiration. He is my writing hero. I would love to meet him, buy him a glass of wine, and have an extended conversation with him, learning first hand from the voice of the Master.