My name is James Moon. I was born on the Gold Coast, Australia, and live in Sydney, Australia.  My hobby is writing stories and poems. Last year, I started writing screenplays and Super Chrono is the first feature length screenplay I have written.

I broke my leg and knee quite badly in 2019 and had to have multiple surgeries in 2020 and 2021. So, I have spent the past 3 years, largely confined to home in a wheelchair or on crutches. On crutches, I used to pretend that the handles were robotic arms that I could use to teleport. From there, I developed the basic premise of the story of someone with a robotic arm that could teleport.

I finally got up the courage to start writing a screenplay after my birthday in August 2021. I started planning the screenplay in September 2021 and wrote it in October 2021.

I like to map all the plot points and characters out first. This is quite helpful with the overlapping timelines and working with a character who is not experiencing the same exact moments as everyone else. See some of the maps are below. When writing the dialogue, I imagine the scenes playing out first in my head. I do this at the gym, work or even walking. I hear the characters talk to each other and when it is settled in my head I head to the computer. 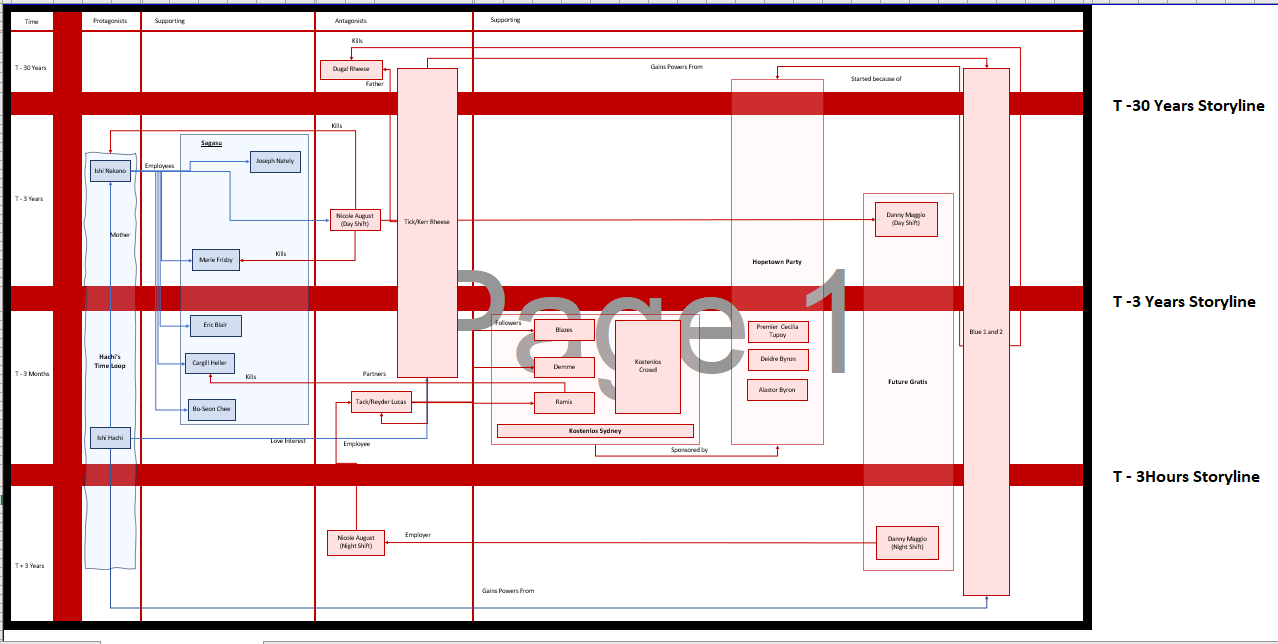 Screenwriting is a hobby for me. I work in finance/economics full-time. I do love movies. I love the ideas, the characters, the stories. I used to skip school when I was a kid and go watch movies at the local cinema. There is just something magical about the experience for me.

My favorite movies are Silence of the Lambs and the Apartment. The direction, acting and writing are phenomenal in those movies. I think most of Billy Wilder’s movies are fantastic. I like to give my stories rich characters who live and breathe in the world. The idea of character collision is fundamental to me. You need fireworks, even the smallest, gentlest touch of a spark in a scene. Cause that’s the way things crumble, cookie-wise.

I have re-watched Seinfeld 10-15 times for the screenwriting. The way writers on Seinfeld create these awkward scenarios the slowly unravel the characters is fantastic. In the Marine Biologist episode every sentence of dialogue has purpose and pushed the story/characters forward.

The first time Lecter and Clarice meet in the Silence of the Lambs. The performances and direction are great – particular the direct to camera dialogue shots.  The scene established an odd relationship and it feels like predator vs prey. But, Jodie has these little facial mannerisms, almost twitches when she talks. You see her mentally sizing up her opponent, putting her feet down and taking her shot. What could have been a cheesy back and forth is turned into something special.

Fran Kubelik in the Apartment.  She is bright, vulnerable and slightly optimistic. She goes through the wringer emotionally and gives up. Thanks to CC she is given a second chance, which turns out to be an ugly and painful experience to get where she needs to go. She feels all too real.

That’s a tough one. Either Pericles or Otto Von Bismarck. They were both ruthless diplomats who found themselves leading a conflict they did not want. Both were great orators, known for their rhetoric.

Maybe Bismarck. Towards the very end of his career, after the death of Kaiser Wilhelm I, he found himself out of place in the court of Kaiser Wilhelm II (a man whose ideals and approach were antithetical to Bismarck’s).  Bismarck soared to such great heights and his career fell upon a man he once called a “badly brought up boy”. I would want to know what that felt like to move heaven and earth and come undone on the will of an idiot.